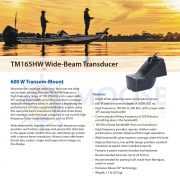 Airmar, Makers of all things groovy transducer wise has dropped its new165HW transom mount transducer. Filling the space between the TM150M and TM185HW for transom mounters
The 165HW brings the high CHIRP spectrum goodness with 30o average beam angle to the 600w market.
the press release is below. But looks to be available shortly!. Contact Moose Marine today for more info 🙂

Maximize the coverage under your boat and see what you’ve been missing. The new TM165HW features a high-frequency range of 150-250 kHz and a super wide 30° average beamwidth, providing maximum coverage across the frequency band. In addition to improving the performance of Chirp-capable fishfinders, anglers using this new wide beam transducer will achieve three times the coverage under the boat compared to our current high-frequency Chirp-ready transducers such as B75H. 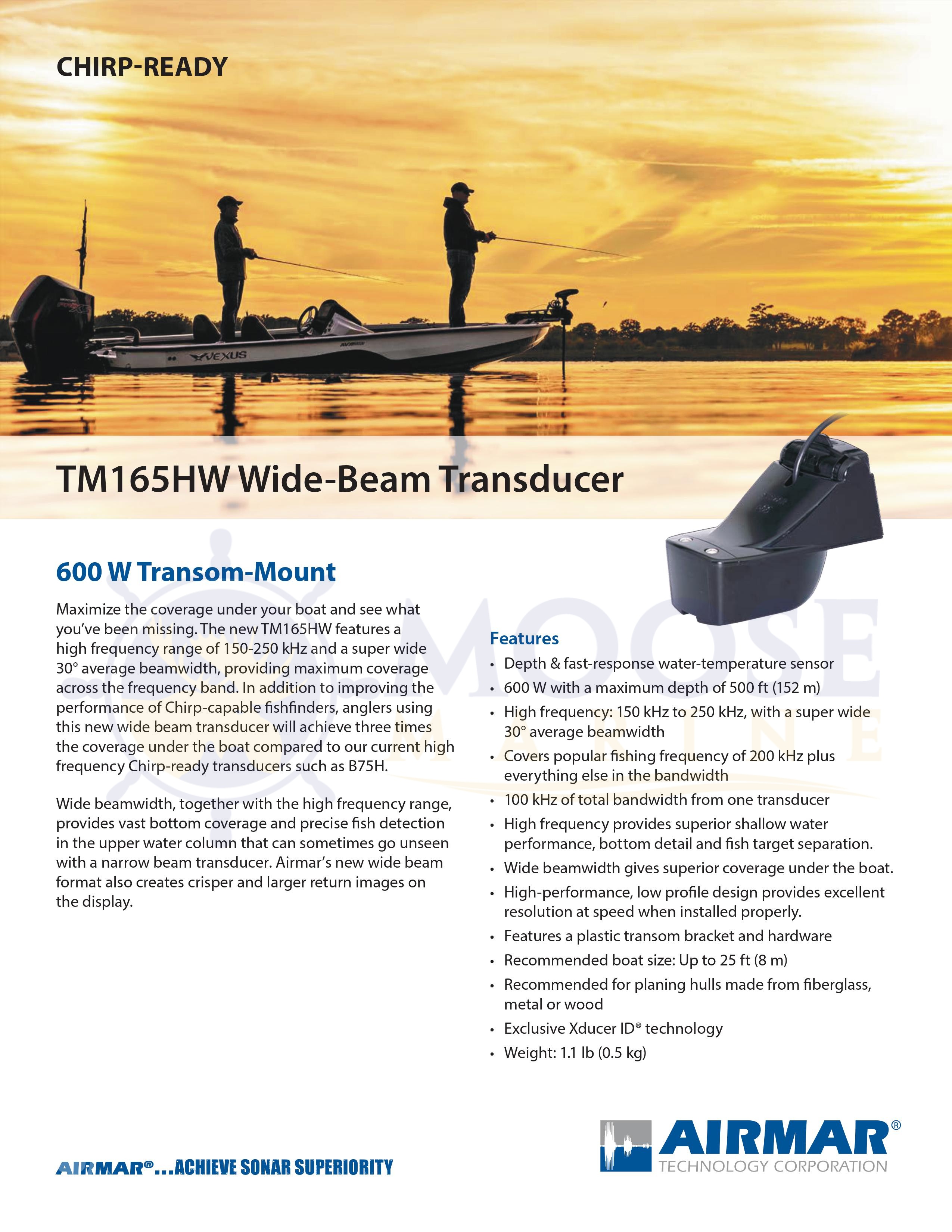 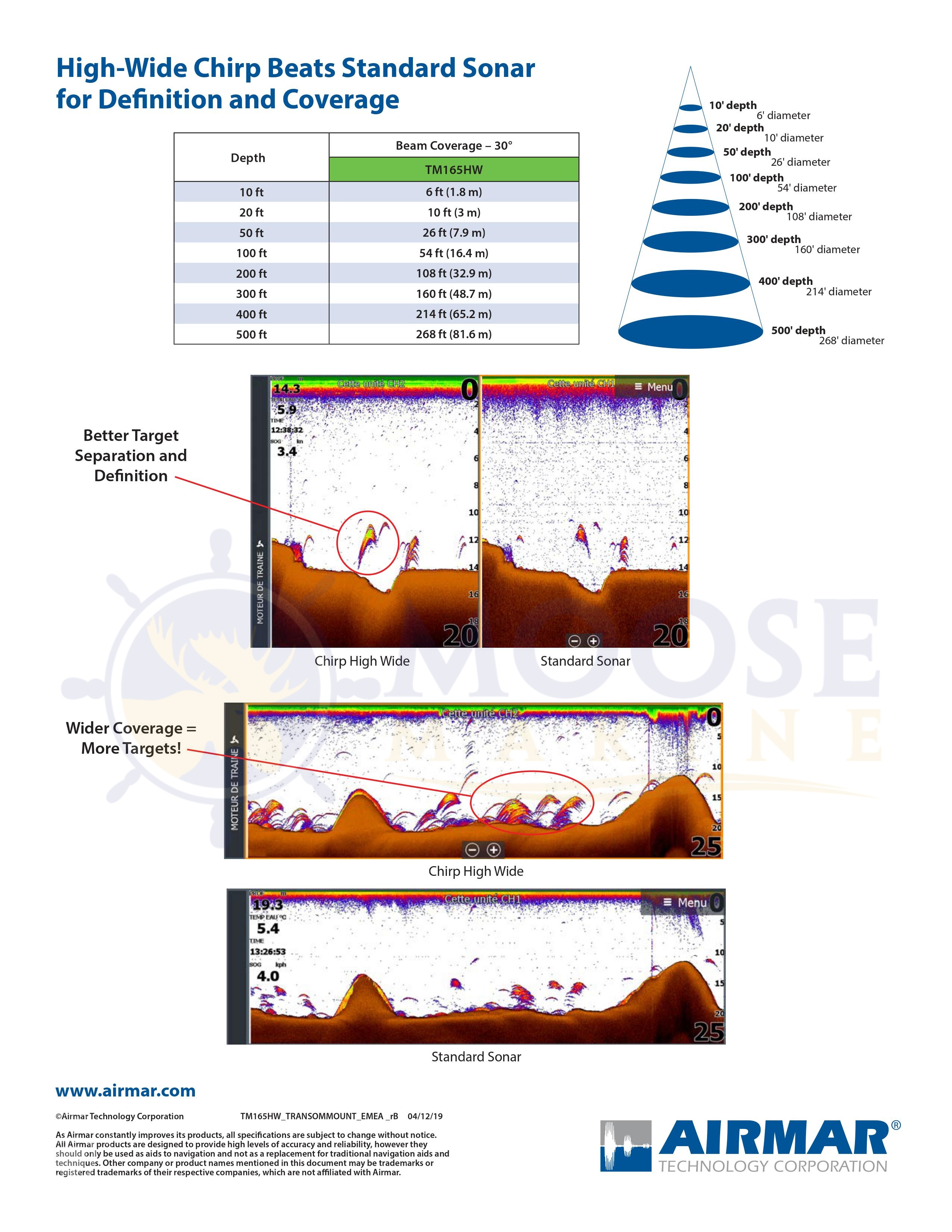 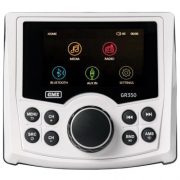 GME has released its new GR350 AM/FM radio, which…. if you’re in the market for a simple happy go lucky am/FM radio for your boat, is good news!. GME has been progressively evolving its line of marine radios from the rounder early 2000s designs to newer contemporary shapes and features “Such as Bluetooth” over the past few years.

The new GR350 follows that evolution step again, Though this time going away from the traditional landscape shaped “DIN” style to a squarer “dare i say POLK/Rockford Fosgate/JL shape” including a 2.5″ color display.
Other than that, it’s all smooth sailing with your usual standard features “AM/FM, BLUETOOTH, AUX IN” 4x 40w channels. would have liked to have seen DAB+ thrown in.

One thing to mention is that it only managed an IP rating of 57. which I assume is taking into effect the open ports/plugs on the back like all stereos however I would be interested to know how waterproof the unit is from the front. “for wash downs and pool parties and such”

For those that want more features, there are plenty of choices. for those who want a simple decent, easy to install yet stylish looking marine AM/FM radio, this will be a great choice.

Available from August in black and white for RRP $249 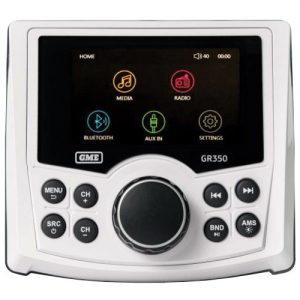 When fusion released their Apollo range i was pretty pumped. excited to see what fusion could offer with parent company Garmins dollars behind it now. A bit of history of the models, Fusions capital range was their 600 and 700 series , both large with fold down opening fronts offering a dock for your phone or cd/dvd player option. both still exist today in the 655 and 755 versions. both now have bluetooth, bonded glass screens aluminium bodies still 4 zones, you get the idea. the smaller range was their 200 series and then 50 series.. both once again had aluminium powdercated bodies, with eventually built in bluetooth. 2 zones at various power levels. and eventually bonded glass screens and NMEA2K connectivity

The 70 series came in to bridge that gap. understanding that most people were not using cds anymore and with their being more than one smart phone company, it wast worth having a dock inside the head unit. especially as people seem glued to their phones now anyway. The 70 series did offer a cheaper price point for its size due in part to plastic body etc. but it was and still is fusions best seller with it being the go to unit for boat/caravan OEM from small tinnies to larger powerboats and yachts, with sales of the 600 and 700 flagship range just falling off a cliff

So… the Apollo series was launched. with two bookend models. a new small “one up from a remote” model called the SRX400. with its cute as a button size, bonded glass now colour screen, wifi and Ethernet. though only one zone and no USB input. and the other end of the scale with the RA770. featuring a full bonded glass touch colour screen control and volume/selector knob. it did feature just about everything , wifi, nmea2k, ethernet, usb, am/fm, ant+, you get the picture

So the two extremes were there. we just needed something in the middle to suit are more conservative client “the 770 is over $800” but one who wants more than the srx400.

Enter the new 670. which if you like is a nice evolution of everything other models…..are’nt
So we get a colour bonded glass screen (like the srx400)
we get NMEA2K (like the 770)
but not wifi ….. which seems like its from feedback, most OEM and retro fitters seldom use this feature, and is left mostly for the big boat world.. so save the peso and leave it out it seems
it does however have USB and bluetooth
also it can run 3 zones up from the 1 of the srx400 and 2 of the ra70. this works well with the Front/Back/Subwoofer 5 speaker system we are seeing often .

ramblings over,
I am excited to see a full Apollo range now. Still could do with a boost in build quality. but over all. looking forward to having a play
– Moose

To celebrate boat show season we are running some awesome deals on what is by far the best winch system available for your boat.